You are here: Home » Blog » Guidance and Advice » Fire Risk Assessment; A Worthless Expense, or an essential tool?

Fire Risk Assessment; A Worthless Expense, or an essential tool? 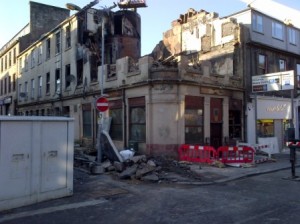 Many businesses see this as a nuisance, something they are required to have, but really don’t see a need for. In truth, yes, the law, in the shape of the Regulatory Reform (Fire Safety) Order 2005, requires it of every business, but is it really something that has no value beyond satisfying some busy body inspector?

If it is done properly, and if the business manages the risks identified in it properly, then it can and will have tremendous value for the firm.

Let’s be clear, a good, professionally done Fire Risk Assessment will do far more than simply identify potential fire hazards and determine whether or not everyone will safely escape the building.

It will identify those things that could put your entire operation at risk, indeed, which could wipe out your business completely. For many that may appear to be a fairly simple and straightforward exercise, for others it can be a lot more complex. In essence it comes down to the fact a fire risk assessment must do the following:

So what’s the problem? It may surprise many businessmen to know that the ‘fire hazards’ most people can readily identify are not necessarily the ones that present the highest ‘risk’ to people or the operation. Nor is it always the most obvious people who are most ‘at risk’.

One further complication is that many people confuse ‘hazard’ with ‘risk’ and often use the terms interchangeably. Any given ‘hazard’ may come with certain ‘risks’ attached, but now we must look at the likelihood of an event which will give rise to the ‘risk’ becoming a threat.

This is where a properly made assessment becomes an extremely valuable tool in deciding how and where to focus one’s efforts on protecting the business’ people and assets from fire, whether deliberate or accidental.

In identifying the Fire Hazards the two key components are the fuels and the ignition sources – and it would be very surprising if you could not find plenty of both in any given office or shop.

Some fuels may not be obvious, others will leap out at you, but may be present in such limited amounts as to not be a problem. One of the more amusing (but potentially lethal) assessments of a major supermarket’s stores identified the shelves containing alcoholic beverages as a ‘major hazard’ but ignored almost four times the quantity of cellulose wrapped crisps and snacks three aisles away. 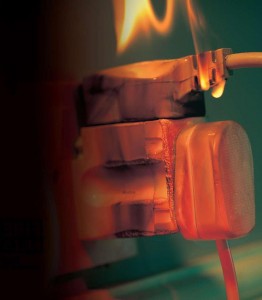 In a fire test conducted for another chain, it had been shown that the greatest fire hazard in any such store was the crisp displays. In fact the test had to be terminated, because a very small portion of a test display had produced so much heat and flame so quickly it was threatening to destroy the test apparatus and the test hall.

Most office workers will not readily identify their chairs, files and papers pinned to dividers as ‘fuels’ and potentially dangerous, but they would probably identify the computer and several other electrical appliances as ‘fire hazards’ if asked. The truth is that the files, loose papers, books and other paraphernalia in their offices or cubicles are more likely to be the ‘first fuel’ than anything else.

The law states that the Risk Assessment must be ‘suitable and sufficient’ and that the measures identified as necessary for the safety of the people must be acted upon. It also states that the Risk Assessment must provide details of all the matters considered and there is sometimes a bit of confusion here as the HSE guidance states that it must set out ‘all the significant findings’ – in essence all the matters considered in making the assessment, not simply the outcomes.

There are two distinct aspects here, the first is to be clear on what is ‘suitable and sufficient’ and the second is to make sure that it is kept current. Fires are very complex events, so, while it is easy to go round a premises with a checklist and identify all the things on it, it may not be appreciated that there are aspects which will affect the way any fire will behave inside any given building which are not identified when using that approach.

Now we are getting down to the real nub of the problem. Turning once again to the checklist style approach, one can easily identify certain sources of ignition, the most common being electric cords, connections and appliances. 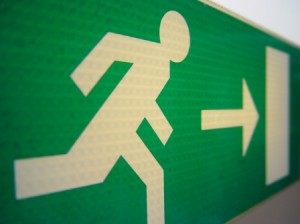 For a fire to occur we need three basic conditions to be right. First we need an ignitable fuel. Solids and liquids don’t burn, they must first be converted to a gaseous state which can be ignited.

So we need a heat source capable of raising the fuel to a temperature sufficient to make that conversion, and then there has to be sufficient heat to sustain it and a source hot enough to ignite the vapours being produced.

Once we have ignition, there has to be sufficient fuel to sustain flaming combustion and allow the fire to grow. Right, assuming we have the fuel and a heat source (think of a high wattage halogen lamp placed against a curtain as it Windsor Castle) and we have open ventilation. The curtain pyrolyses, producing white ‘smoke’. The continued heating now causes the curtain to char and smoulder, and the smouldering strands, have sufficient heat to ignite the ‘smoke’ which is, in fact, flammable vapour.

Now we have a fire, which rapidly spreads up the rest of the curtain, which falls and ignites carpets, upholstered furniture and wooden panels.

Moving that into an office environment, we might find a stack of files in contact with a lamp or another heat source. In ordinary circumstances not a problem, but now someone changes the lamp, replacing it with a brighter one. Now the paper begins to char, and charring is the first stage of pyrolysis.

An office or a shop is filled with potential fuels, the key here is to ask how much is present, how ‘connected’ the fuel packages are and how fast they are likely to burn.

We all know that some materials burn much more readily than others, and many are very easily ignited. Increasingly we have large amounts of plastic in workplaces (and our homes) and most do not realise that plastic is a solidified hydrocarbon. We can modify the ignition characteristics of most of them to a degree, but again, ‘fire resistant’ or ‘fire retardant’ does not mean it won’t burn – just that it will be more difficult to ignite and initially, won’t like burning. Unfortunately, once they do get going, they tend to be very nasty indeed.

The law requires us to determine how high a fire risk is present in our premises and to attempt to mitigate it. This 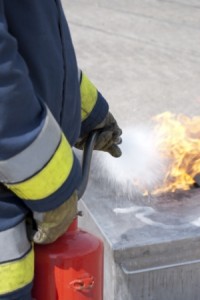 means that we do need to have some idea of where a fire could start, how big it will get and how far it is likely to spread before something (like the fire and rescue service or a sprinkler system) stops it. (Other legislation may, of course, impact on how it affects your neighbours, the man in the street, fire fighters and visitors as well.) Thus, according to most of the guidance, we have to consider the following:

You’ve probably spotted the fact that it doesn’t mention the fire at all. That may be deliberate, since the emergency plan may need to cover other eventualities as well. Be that as it may, for a fire risk assessment to be valid it needs to give some idea of the following:

As we have said, there is plenty to burn in any premises. Once you have ignition of the fuel there are 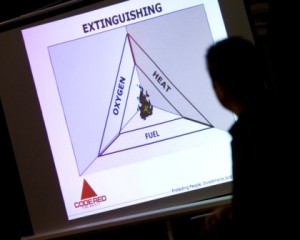 two possibilities. The fire will self extinguish because there is too little fuel present, or it will continue to develop.

Now the room size, ceiling height and ventilation will determine how fast that happens. A low ceiling will generally give very rapid fire spread because the temperatures at ceiling height are higher than they would be if you have a high ceiling.

A high ceiling temperature means more heat radiating downward (think of the overhead grill on a stove) and assisting materials further away from the fire to pyrolyse and prepare to ignite.

Restricted ventilation means that more smoke will be produced and that is unburned fuel. Worse, it is fuel at or near it’s autoignition temperature, and when it finds an oxygen source, it can and probably will ignite explosively.

A fire developing with restricted ventilation produces more Carbon Monoxide, and that is not only combustible but explosive.

Now, in all honesty, the vast majority of Fire Risk Assessments don’t spell all of this out, and they probably don’t need to. What it must do is identify how you, the responsible person, can manage the fuels, ignition sources and people in such a way that, in the event of a fire, the people will all leave in an orderly and safe manner.

If you have a really good risk assessment, and it is properly managed, you will probably also be able to keep on top of any changes to the hazards and the risks and prevent any fire from occurring. Unfortunately, to do that you also need to have a very clear idea of how even small changes to the layout of furniture or operations can change the fire hazard or extend and alter the escape routes.

Another aspect is understanding how the change of an operation or a piece of equipment can change the risk. For example, changing a machine on the factory floor which uses a higher temperature, or perhaps a more flammable liquid in its operation can alter the risk to workers nearby considerably. The same goes for changing the manner in which paper filers are handled and stored.

Simple seeming changes can have a major impact on the safety of your premises, but it need not be disastrous. The key is having a through risk assessment for fire hazards and then managing it properly.

Unlike the old Fire Certificates it shouldn’t live in a filing cabinet. You ‘own’ it, it is yours, and it is the key to keeping your business in business. Even a small fire in a business can have far reaching and very serious consequences. Sometimes it isn’t the actual flame damage that is the problem, but the by-products of the fire carried in the smoke and heat plume to other parts of the building.

Prevention is far better than cure is an old saying, and in the case of fire probably far truer than we like to think. A good Fire Risk Assessment can go a long way toward making sure potential fires remain just that – potential and not actual.

Born in Cape Town and educated at Selborne College in East London (The South African one, not the other place in the UK), Patrick is a published technical author and a now retired Fire Fighter and lecturer after thirty-six years of soot, heat, blood, sweat and laughter. He has spent the last twenty-three years in England and now lives in Germany. The last 14 years of his career were spent at the Fire Service College, Moreton in Marsh, where he was a Senior Lecturer/Divisional Officer responsible for International Fire Safety courses, Fire Investigation and lectured in a range of fire safety, management and related matters. He retired in 2006, and now lectures on Fire Investigation and at Conferences internationally. He is a contributor to a number of professional magazines, and writes fiction novels for a bobby.